First of all, I would like to speak about difficulties that nepal and nepali people encounted these days. I am really affected by what happens. I was at kathmandu during the earthquake. Hopefully I am fine and my familly also. But it is not the case for a lot of nepali people. They need help. If you are interested, you can donate to :

I love to visit Nepal by running. I never want to lose this nice opportunity in my life. This year I decided to run trail des 3 Valley organized by Dawa Sherpa. It is 350 kilometers through Langtang, Ganesh Himal and Manaslu. The start was 4 April 2015 from Bouddha in Kathmandu and we run until the 18 April in Besisahar. It was the second time I took part to this event. I was hardly happy to take part this race.
That day, I was very happy to take this start but afraid also because I know already how much we will run. We got a very nice team, this start was a really nice moment. In Bouddhnath is really a peaceful place. After nice wishes of Dorjee, we did 3 round of bouddha, it was so amazing moment. After, we took bus until Sundarijal in order to avoid pollution in the valley and we start to run from here. All team was very excited with smile.
photo douring around bouddhanath 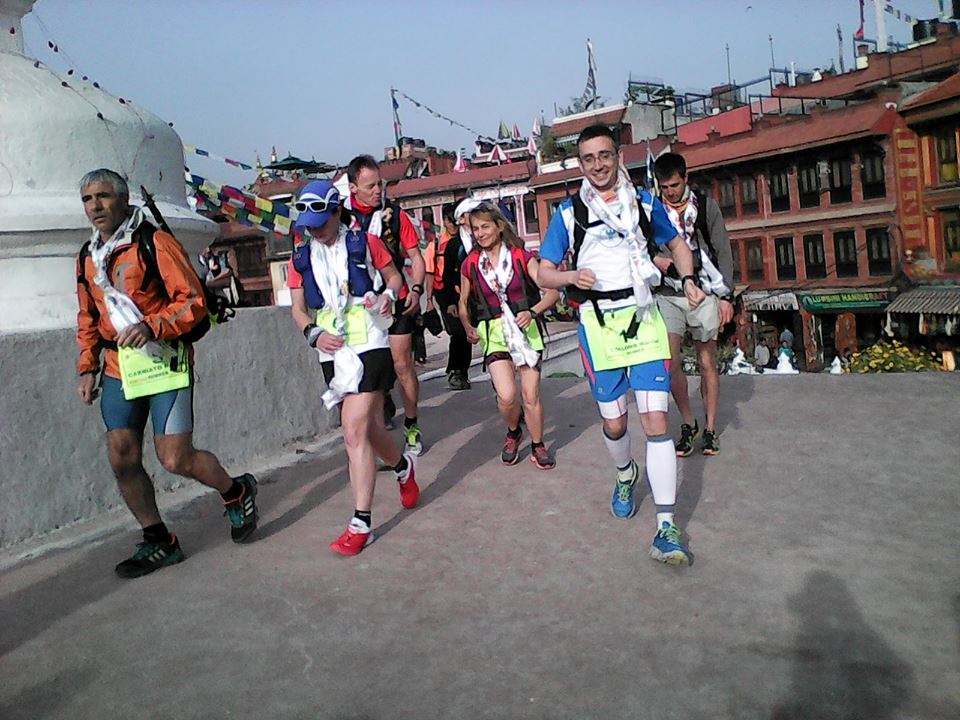 Frist step, from Sundarijal to Chipling in Langtang, was some time up and sometime down. It was a sunny day and at the middle of the way, I fell so hot. But my aim was to finish so I continue my way slowly. I finish this step after my brother Pemba. We all runner have finished and we were together, we took photos and drink beers near the lodge in a sunny place. I was so happy to be together with all the team. 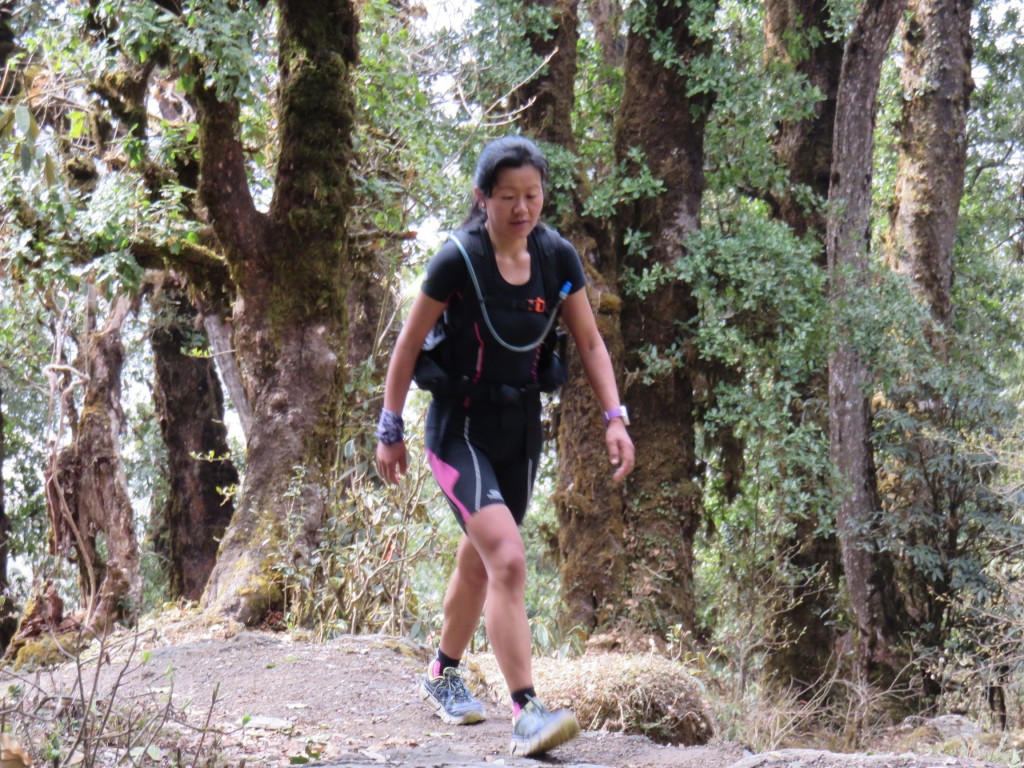 Legend : On the way from Sundarijal to Chipling

For the second day, from Chipling to Tarepati was a lot of uphill. We have fund a lots of snow. It was so crazy: The finish line was very cold. The lodge was at 3700m altitude. I filled so cold. That day, porters were very late because of altitude and so much snow, the way was quite long also, around 25km. We got nice food to eat: fry rice and fry potatoes (‘Aloo’ in Nepali). I ate a lot but some running friend start to got difficulties to eat because of high altitude and conditions. 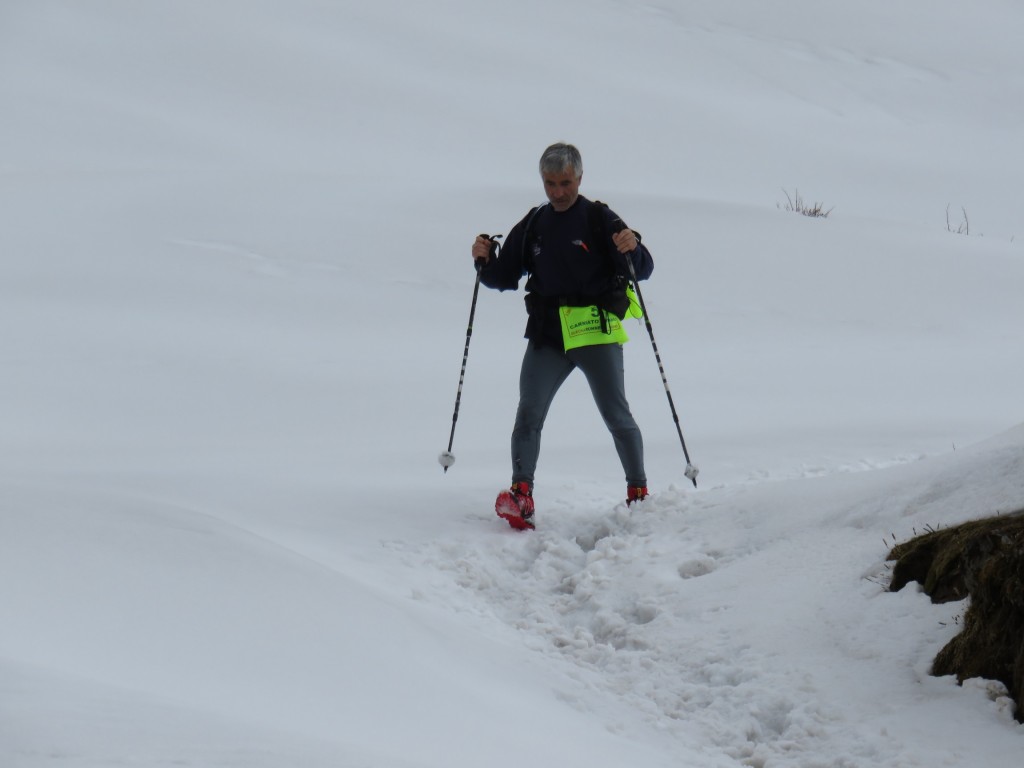 Legend : Arrival of Renato at the finish line

The third day was a big day, we cross the first high pass at 4600m Laurebina pass and we run over the Gosaikunda lake. We find a lots of snow but it was not so much difficult. I did a slowly start and I keep energy for the pass and the last downhill. I did a nice run this day. We meet so much tourist on the way. Gosaikunda lake is a place where people use to do wishing. It is a touristic place for this. This day we stay in Laurebina. People are so kind from this lodge. It was in 3800m. They start the traditional “Chulo” (Oven) in dining room for the team. We were very happy to be all around the Chulo in a hot place after running over 4600m. We got some Yak cheese to eat with some beers. 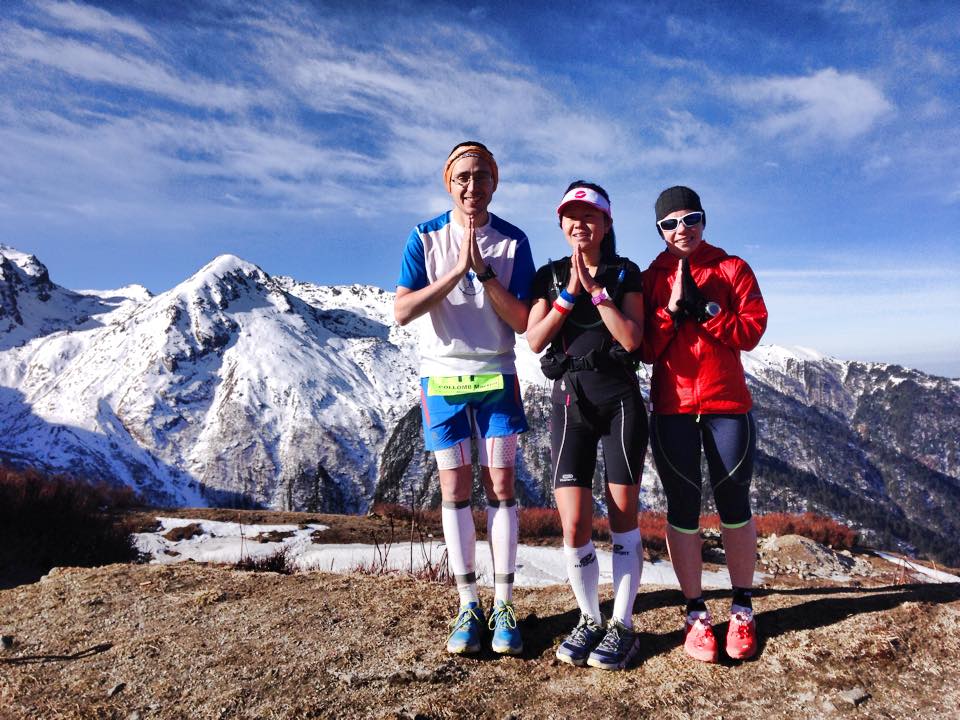 The following day was a short step: Just go down from Laurebina to Siaphrubesi : Downhill of 2500m in 18km only. The morning was very cold, we got a nice view of Langtang and Ganesh Himal. it was so beautiful. We took some photos and after we start to run. I was very happy to run downhill but after 10km I filed hard. My legs was tired and my body was filling hot. When I finished, I got no more energy in my legs but I was happy to be at a nice and hot place. We find nice shower, nice room and internet also. We were all happy to get this facility. The race was very short so we took time to visit also the little city. 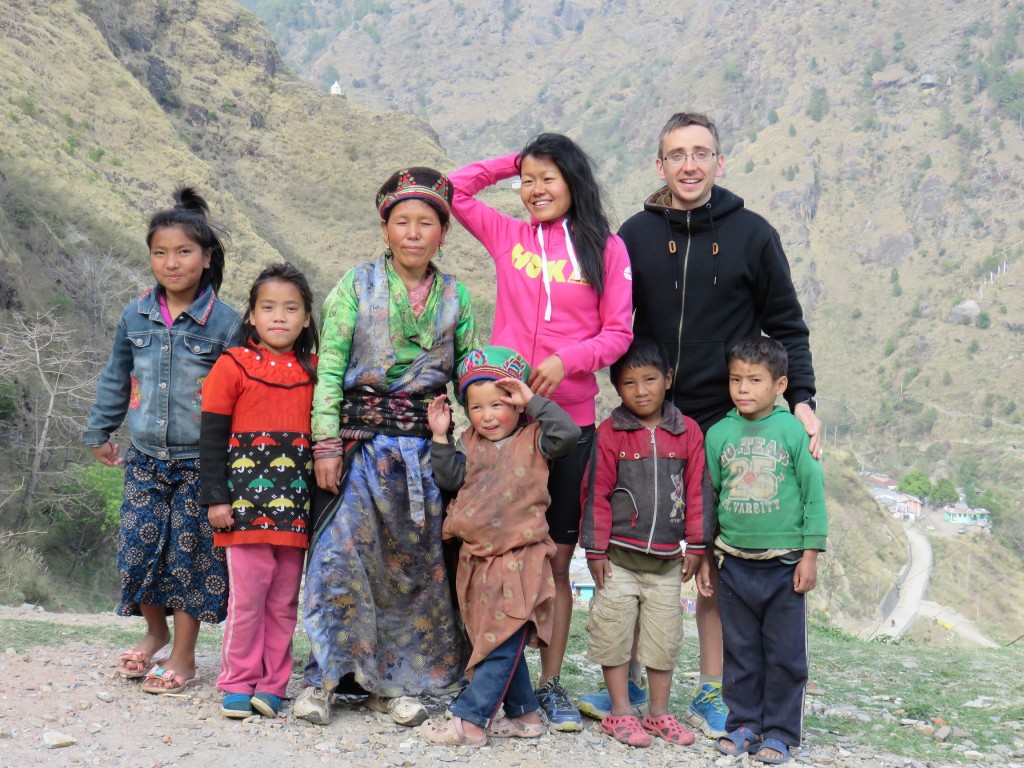 The day 5 was very hard for me. I was physically very weak. The way was difficult to find. This day some friends got problem with way. Me I arrived even difficult because I tried to remind me the way from two years before. But some friends was lost on the way. Luckily, they arrived all together in evening. This evening, our staph prepared a nice Sherpa stu (veg soup with floor) and Dal Bhath (Traditional nepali meal). It was delicious. 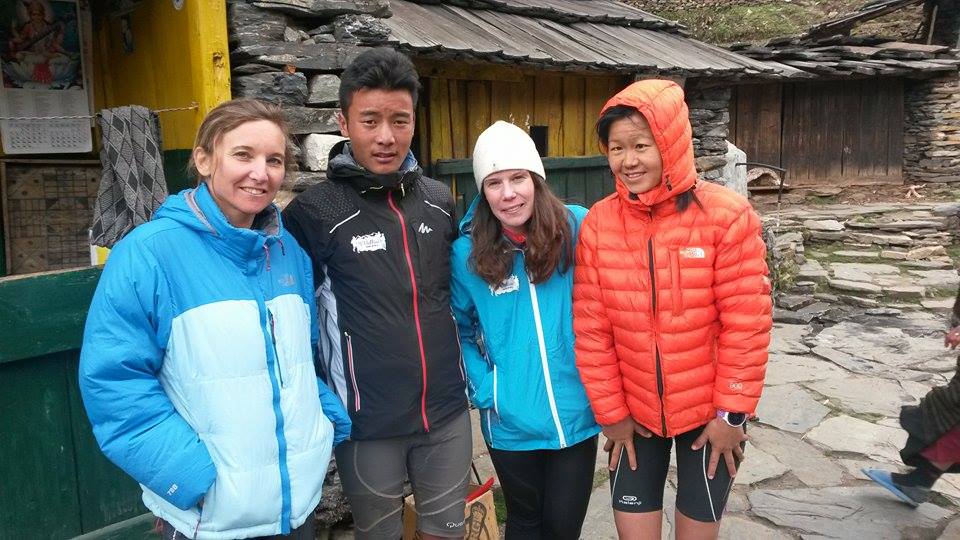 The day 6, we start to go to Lapagaon for around 35km. The way was quite dangerous wish vertical parts. I was afraid about these parts one the way so I did very slowly. I took time to see nature but also always be careful on the way. On the way, we meet some nice traditional villages and nice white mountains vary far like postal card. When I cross this villages I missed my village Chhee in Solukhumbu. It was not so much different. Villager people are very very old they tried to speak with us. Some people asked me? Why you are running? I took time to reply. The finish line was in Lapagaon, a nice Gourung village. It is a very nice mountain village at 1800m. There is a lot of people in this village but it is not in a trek way so there in no real lodge. It is a really organic village. We took on day of rest in this village. We took time to visit and do a lot of photos. 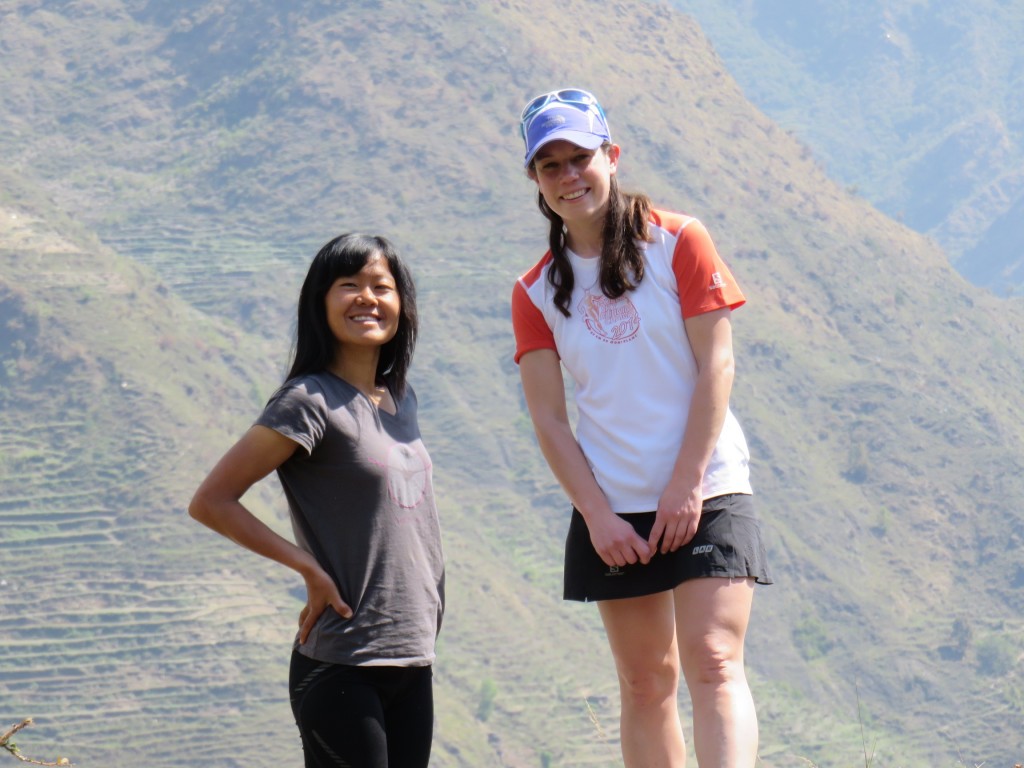 The day 8 was the longest step of the race: 37km to reach Rumchet (2000m). At the Beginning we lost the way… we were 4 runner together. We tried to call other runner in the middle of the forest but no answer… We suppose that we were lost since long time. It was impossible to back. We meet some local people from this aria and I speak with him in Nepali. He explain me very honestly to me about way. So we follow his advice. We walk some minutes and luckily we meet same way of the race. We were very happy. After this, the way was still long until Rumchet but very nice and without any trekkers.
The day 9 was most of time a runnable way. We entered on the Manaslu valley. I didn’t fell very easy and I finished by walking. Hopefully, the staff and friend was here at the finish line to give me back smile with a tasty juice. This day also we find good room and good food but my mind was going hard because we were not far from Larke Pass.

The day 1O it was a long way of running. I didn’t want to run this days. We wake up with a heavy rain. We decided to postpone the start to 8:30. And hopefully, the rain stopped just after the start. But my running was going hard day after day. And that day I arrived very late. i was already ready to be late in my mind. Just to do my way honestly not more. When I have finished my race it was very cold but we got a nice lodge and we slept well. All was fine after.

Day 10 : This morning, we start to go to Samdo, a tibetan village situated a 3700m near the China border. This is the beginning of high altitude for running. I took big clothes for change after running. The weather was not so bad: Quite normal to be cold but it was accetable. I did nice running this day. I we finished race after not so cold, we got a nice sun. The village is just under a lot of snow summit above 6000, 7000m. It is a very nice place. Even at this altitude, we fell so small. We took a lot of photos and play with two little girls: Chiling and Pasang. 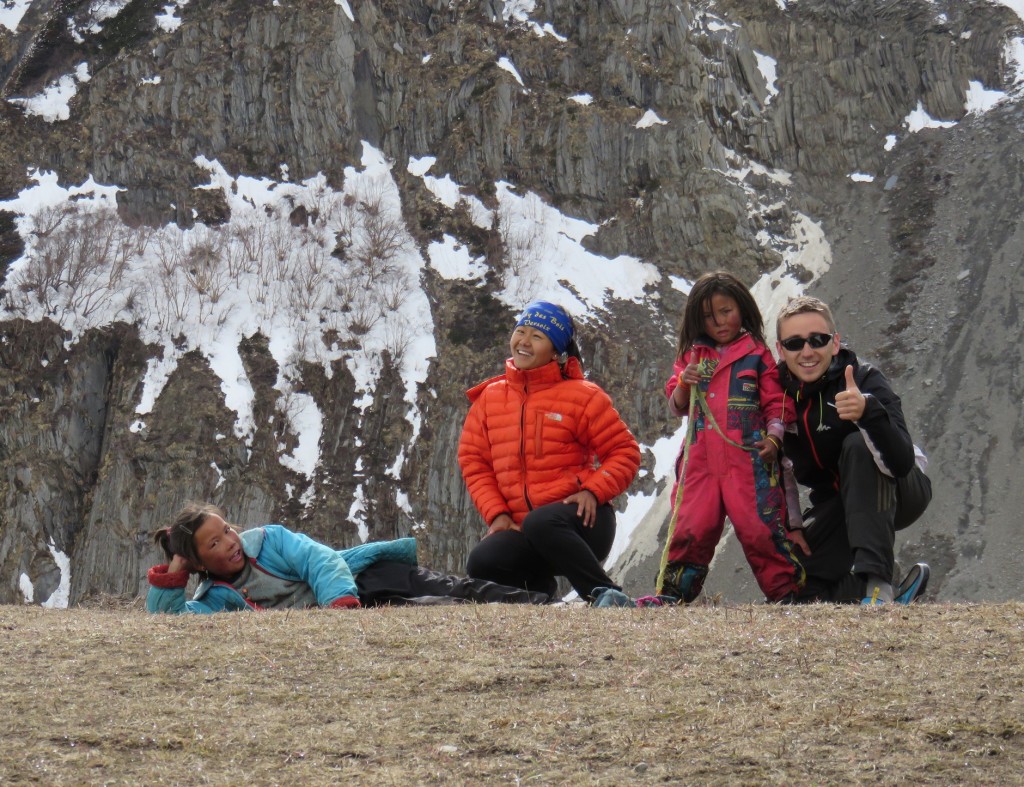 The Day 11 was a big day. It was the maximum altitude we reach on the race: 5100m at Larke Pass. We got up very early morning. We took breakfast. Normally Samdo too Larke pass top is 15km. it was not so much difficult because we were slowly. We got a very nice sun during “running”. We took same rest at the pass and we took photos for memory. After, we were down from the pass to Bhimtag. But weather was changed and we got a lot of snow. We did this down slowly slowly because it is quite dangerous. 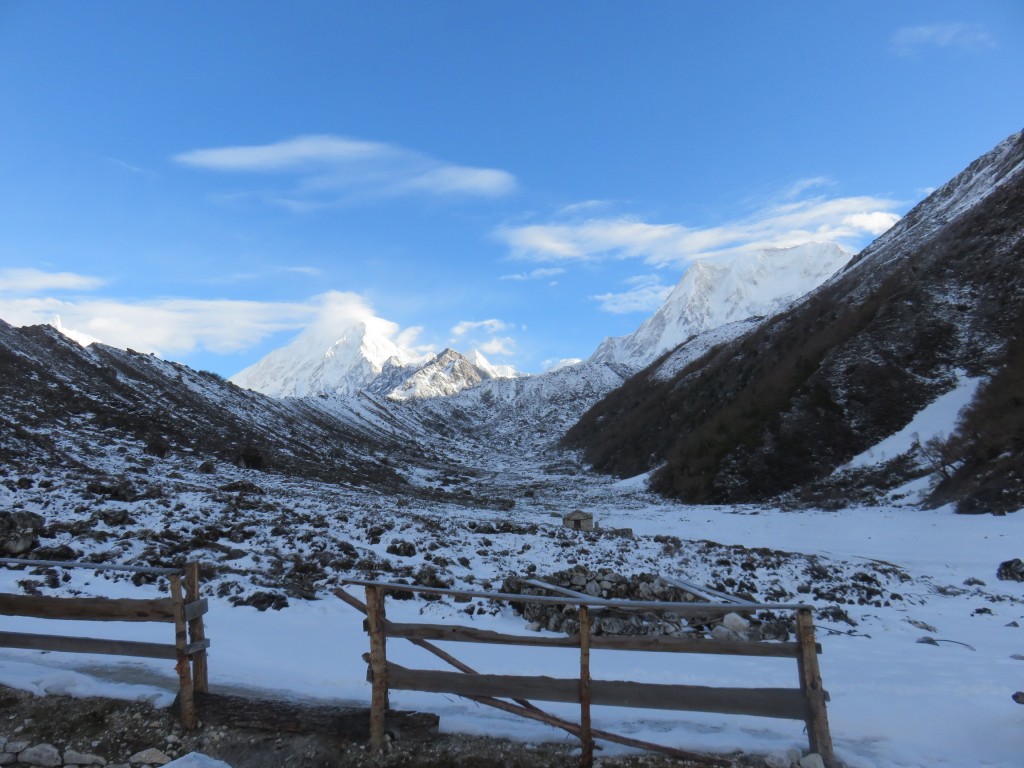 The day 12 was a long and slowly downhill to the village of Tal near Anapurna, a very nice place and hot. All runners would like to be at the finish line. So much excited to be at “the last day”. During the downhill, I feel like flying myself from Bimthag to Tal. I run very well. After the race, we got a very nice lunch. We took also shower and clean some clothes. We got also internet, we were very happy. In order to thanks porter we did also a little party with music (even if we have still a day of running!!), it was a nice moment. 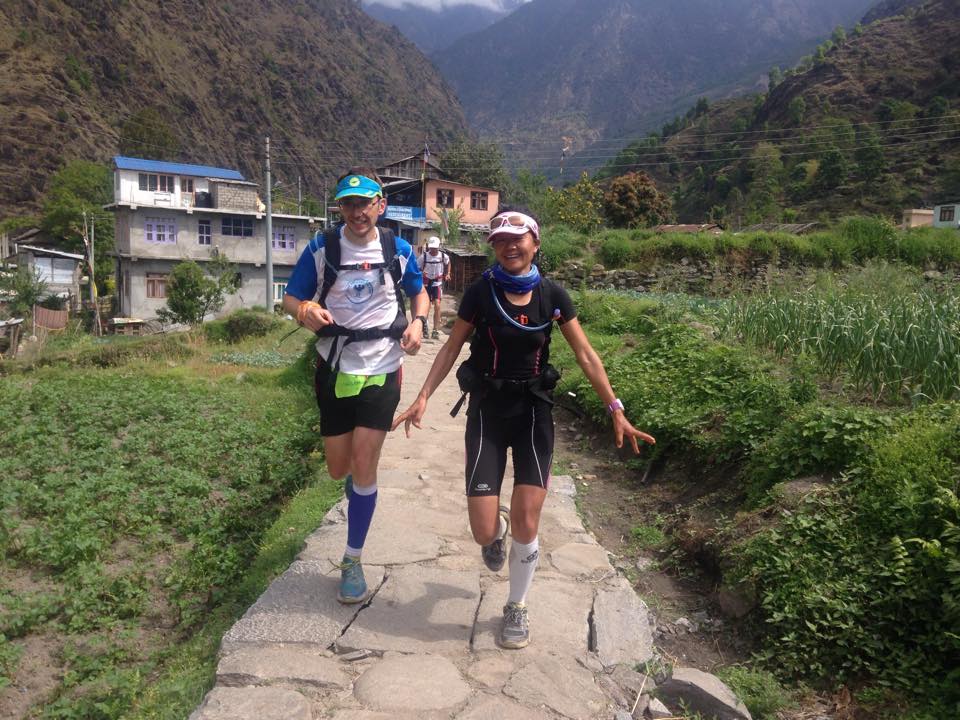 The last day we decide to run and fun together also we did it. I never forget this moment. It was impossible to run all together but we did it as well as possible with a group of 5. We run very nicely. We arrived on time in Beshisahar. We was so much happy to do finished this race, we got a so nice meal at the arrival, with beer also, so nice! 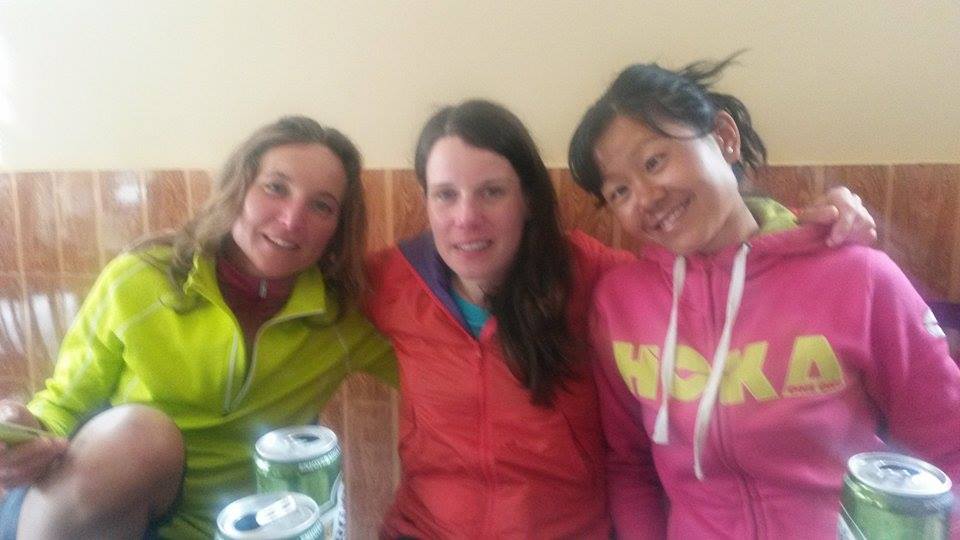 This race organized by Dawa Sherpa and sport adventure. I would like to give a great thank you for this nice organization. I am very happy with all 3 Vallee team. I think this race is one of the biggest challenge in Nepal (the world?? :p). We were success for this huge challenge without any problem. Many many congratulations all of you,,